Under the High Patronage of the President of the French Republic.

Les Margaret Awards reward every year European and African women entrepreneurs and intrapreneurs, whose projects and innovation meet the major challenges of our society.
The award is named after Margaret Hamilton, director of the software engineering division that developed the embedded software for NASA’s Apollo space program. It is thanks to Margaret Hamilton’s contribution that man first walked on the Moon.

Through les Margaret Awards, JFD supports the growth and international influence of startups and initiatives led by European and African women. 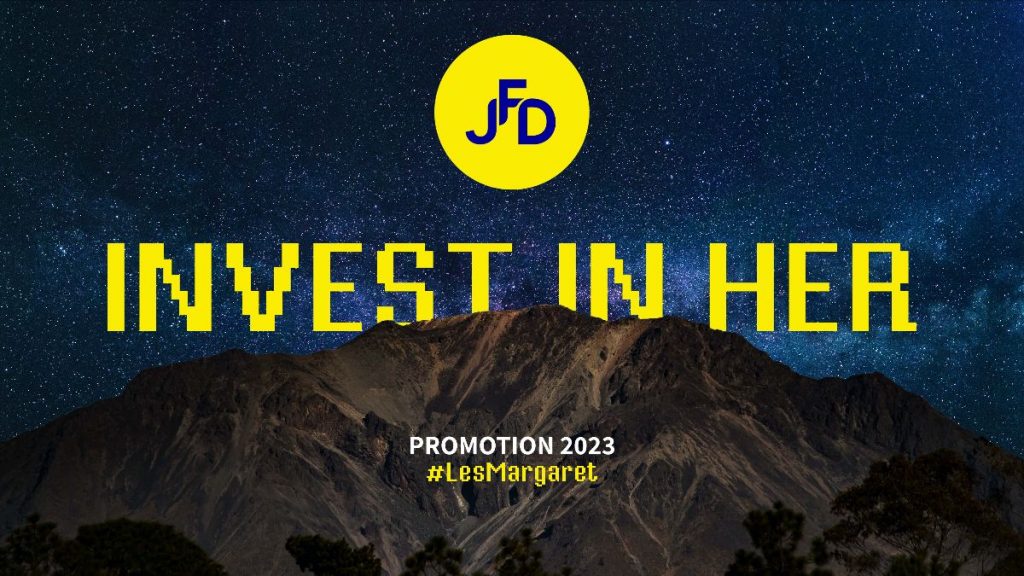 You are a female founder or co-founder of a tech startup for the “Entrepreneur” category.

You are a female employee and you developed a project in agreement with your employer while remaining an employee for the “Intrapreneur” category.

You are a citizen of a European or African country, your project is innovative and respond to societal issues.

Finalists for the Margaret 2023 Award will be pre-selected by JFD and then presented on February 9, 2023 to a jury that will elect four winners in each category:

Advocating for greater recognition and support for women in computing

Professor of Computer Science at Durham University, Sue has spent the last 20 years campaigning for greater recognition and support for women in computing through TechUpWomen for instance. The programme offers training in digital technology for women from disadvantaged backgrounds.

Software engineering student Xaviera Kowo, 18, became the first winner of the Margaret Junior Awards 2021 in the Africa category. The young Cameroonian presented her waste processing robot. Capable of picking up debris as it passes by and transporting it to a defined area (garbage bins, waste disposal centre, recycling centre, etc.) in record time. As a teenager, she became interested in STEM, attended seminars and became fascinated by the success stories of women in tech. This allowed her to develop skills such as public speaking, even forgetting her shyness. Today, one of her deepest wishes is to inspire other young people, especially girls, to reach their potential.

Former CEO of Endeavor Nigeria, Eloho created Firstcheck Africa, a fund made up of a community of women business angels and investors. The aim is to make it easier for African women entrepreneurs in the digital world to raise capital.

Elham Kashefi is co-founder of the startup VeriQloud, which aims to learn about the strategic plan for the development of a quantum computer network, published last February by the White House. Their ambition: to become the leader of the quantum world. Elham Kashefi is Professor of Quantum Computing at the School of Informatics, University of Edinburgh and Director of Research at the CNRS LIP6 Sorbonne-University. She co-founded the fields of quantum cloud computing and quantum computing verification.

The engineer started her career in 2011 as a mechanical engineer in the public works department. Then, she founded iMedTech in 2015, a biotech company that specialises in designing and manufacturing custom medical solutions to improve the lives of Africans. In 2018, she co-founded 3DIMO, a company that automates the analysis of livestock data. This generates in-app universally traceable digital identification of each animal linked to a farmer and will provide the farmer with a tool to record animal vaccinations, movements and stock control.

Linnéa Kornehed is transforming road transport through artificial intelligence. She founded a startup in 2016 that develops autonomous electrically powered vehicles. The Swedish company Einride was the first to implement an autonomous electric freight truck, long before groups like Tesla and Uber.

Anastasia Mikova has been an investigative journalist for 10 years and is the co-author of the documentary project “Human”, which has been viewed by over 100 million people worldwide. This committed woman also co-directs the film “Woman” with Yann Arthus-Bertrand, which has been shown in over 40 countries. Passionate about social and humanist causes, her motto is to “let people tell their stories” in order to better understand them.

Afua Osei is a Partnerships Strategist helping digital entrepreneurs build the skills, systems and confidence to work with the corporate clients of their dreams.

As a Co-Founder of She Leads Africa, Afua built a digital lifestyle platform for millennial multicultural women reaching more than 800,000 women across 100+ countries.

She receives the award for her actions as Director of the Gender, Women and Civil Society Department at the African Development Bank.

Karen Vernet, General Manager of the Printemps Offer, received the award in her capacity as Director of E-Commerce Development for Printemps.com. She is responsible for the development of the Printemps.com website, a committed vision of luxury designer fashion that is resolutely inclusive, exclusive and benevolent.

Co-founder in 2018 and marketing director of Wastezon, Jacqueline Mukarukundo is helping to make the planet cleaner. Indeed, her Rwandan clean tech startup is harnessing technology to create a world without waste. Specifically, the company connects households and businesses with e-waste with local recycling industry players.

Aline studied business engineering in Brussels. She is the co-founder in 2015, at only 21 years old, of CitizenLab, an e-democracy platform that allows governments to give their citizens a direct say in matters that affect them. By involving citizens in the decision-making process, local governments can increase efficiency and shape better policies.

In 2015, she founded the association Resonantes and launched the first solidarity application for women and girls who are victims of violence: App-Elles. The name speaks for itself, the play on words is simple and obvious: an invitation to take action, a reminder to tell victims that, in the face of violence, they are not alone!

Rebecca Enonchong is founder and CEO of AppsTech, a leading global provider of enterprise application solutions.

Julie Davico-Pahin is the co-founder of Ombrea, the climate regulation system for crops via artificial intelligence. After starting her career as a journalist, she joined forces in 2016 with Christian Davico, a former farmer, and together they founded Ombrea. The Aix-based startup develops and markets a solution for protecting and managing crops against climatic hazards. The team, mainly composed of agronomists, doctors in biology and computer engineers, makes Ombrea a tech company at the service of farmers.

Arielle Kitio Tsamo is a Cameroonian entrepreneur and computer scientist. She is the founder of CAYSTI (Cameroon Youth School Tech Incubator), a technology awareness centre that introduces children to technological innovation, programming and robotics created in 2017.

In 2015, Arielle Kitio created the association WIT (Information Technology for Women and Youth) which aims to highlight women who stand out in the fields of science and technology and encourage young Cameroonian girls to opt for scientific and technological fields.

An international lawyer, Céline Bardet fights against the impunity of rape as a weapon of war. She works as an expert consultant for the United Nations, the European Union and institutions such as Interpol. In 2014, she founded the NGO “We Are NOT Weapons Of War (WWoW)”, which aims to transform the techniques of working in the field with victims of war rape. She is now the President of WWoW. On this website, she describes sexual violence as a military strategy in its own right. In 2018, WWoW launched Back up, an encrypted mobile reporting app to collect testimonies and evidence of war rape.

Siham Laux is one of those entrepreneurs who make their dream a reality. Convinced that residents must regain power over their living space, she became an intrapreneur within the La Poste group and created the Ô fil des voisins platform, enabling everyone to co-design their own home.

In February 2016, during a stay in Scandinavia, in Oslo, within the Open Food Network organisation, she discovered social entrepreneurship and the collaborative economy. Taking advantage of the experience of the OuiShare network, she learned about the computer technology of collaborative sites and, surrounded by other co-founders from different countries, set up her project to create a company with a strong social impact, “Too Good To Go” aimed at fighting food waste. It is a platform that brings together food retailers (small traders, distributors, etc.) and responsible users. Thanks to geolocation, the latter can locate unsold products which are then sold at a price well below their original value.

Before joining the Microsoft France team, where she is in charge of the start-up audience, including the Bizspark and Spark coaching programmes, she was editor-in-chief of TechCrunch France and worked for European start-ups in London.
In 2007, she became a business manager at an agency that helps American Silicon Valley companies expand in France and Europe. She co-founded the French and British branches of Girls in Tech and co-organised the Failcon Paris conference.
Coming from Silicon Valley, trilingual, recognised as the woman who boosts the French Tech ecosystem, her journey at digital speed led her in October 2015 to the head of the Freyssinet hall.
This multi-faceted profile of influencer, host, connector, mentor, event organiser, editor, author of the TechBaguette blog and start-up lover, seduced Xavier Niel to pilot his Halle Freyssinet project!

Josephine Goube co-founded Techfugees, an international non-profit organisation that coordinates the technology industry’s response to the refugee situation.  She is also CEO of Sistech, which provides displaced women with access to skilled and sustainable jobs in the technology and digital sectors. Sistech runs innovative programmes in Greece, Italy and France with a committed and diverse team and hundreds of professionals who volunteer their time and skills in our programmes.

Véronique Morali founded the Force Femmes association, dedicated to the professional integration of women, especially those over forty-five. Thanks to a network of volunteers and meetings with coaches and professionals during various workshops, Force Femmes helps these people to find a job, to better integrate and assert themselves in working life, or to create their own business.

Since the early days of the Internet in 1995, she has successfully pursued her entrepreneurial journey in the technology ecosystem, co-founding four successful technology companies in France: a WebAgency (as CMO – acquired by Omnicom BBDO), a web hosting company (as CEO – acquired by France Telecom), a blogging platform (as COO – acquired by SixApart), a Startup Studio (as COO – self-financed).

Founder of the investment fund 2050

My dual training in engineering and marketing has enabled me to participate in the digital revolution through the transformation of traditional professions and the emergence of new activities.

I have managed companies (Mediapost Communication), I was part of the Comex of one of the largest French groups (La Poste), I am a director of fine companies (Lagardere, Groupe Casino, GFI), and today I am at the head of a very fine startup for a fine entrepreneurial project (Geolid).

Twitter Linkedin
See les Margaret Junior
« Never let fear get in your way! Do not be afraid to continue even when so-called “experts” say it’s impossible. Do not be afraid to be alone, to be different, to deceive yourself, to do and recognize your mistakes, because only those who dare to fail greatly can accomplish great things.»
Margaret Hamilton
Facebook-f Twitter Instagram Youtube Flickr